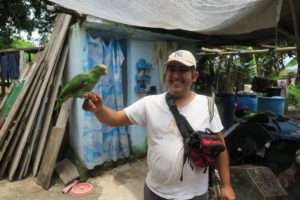 (Here you can see Luis in the garden in front of the bathroom).

I met Luis Alberto Torres on the taxidrive between Purificación and Prado. Luis was in the taxi with the cousin of his mother; an old talkative lady, who wasn’t sure about where she lived or where she was going. Luis told me later, that they had been to Purificación, which is a bigger village 16 kilometers from Prado, because he took her to the doctor. There is a hospital in Prado for it’s 7607 (2017) inhabitants, but Luis told me that the hospital doesn’t have resources to provide proper health service for the clients (sometimes they are not even able to provide any kind af service). Because of that, he prefers to go to the hospital in Purificacón.

Here is Luis in his bedroom. In the big bed sleep his mother and his sister and Luis sleeps in the smaller bed with the purple blanket. Luis does not consider his family poor. Compared to many other families in the village, Louis’ family had enough money to escape to Bogotá during the conflict, which meant that they were not in Prado when the FARC came to “take the village” “tomar el pueblo”. The families that didn’t have enough money had to stay in Prado during the conflict, despite facing threats of violence, torture, kidnappings and murder. Luis and his family are happy to be back and safe in Prado. 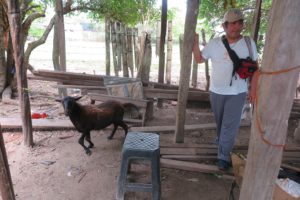 When Luis were ten years old, he remembers three times when the professors at his school told the kids to hide because they thought that the guerillas where coming to kidnap and recruit the kids. Luis also told that sometimes the guerillas came to talk to kids in the schools to convince them to join the armed groups. They did that with showing them smart uniforms and giving false promises. Luis was not afraid of the guerillas. “They are humans too”, he said. “They are afraid too”. The FARC never came to his school.

Luis remembers that one time when he was ten years old, he was on his way back home from school when a car with FARC-combatants stopped him in the street and told him to get into the car. Luis answered that he was able to walk by himself. The FARC-combatants let him go home to his house, and when he got home, he told his parents. A short time after this, the family decided to escape to Bogotá.